Horti China 2018: France's Horticulture Industry has Much to Offer China 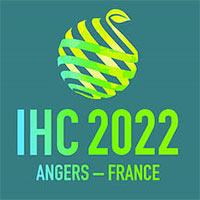 Among the various national presences at the Horti China 2018 international fresh produce and horticulture technology trade show held in Shanghai on November 21-23, perhaps the most unique model of promotion came from the French delegation—which brought with it the message that France has much in the way of technology and knowledge to offer to China's rapidly developing horticulture industry, and should not be completely overlooked in favor of suppliers and experts from other countries.

Rather than being led by a government trade promotion bureau or private companies, the French presence at Horti China was instead organized by members of ECTI, a non-profit organization. ECTI is composed of retired French professionals dedicated to transferring their knowledge and experience to younger professionals currently working at French companies in France and around the world.

Two ECTI members were present at Horti China to promote French horticulture generally, and specifically the horticultural industry of the city of Angers, home to a nationally-supported cluster program, Vegepolys, focused on plant breeding and horticulture technology. They were Jacky Brechet, an agronomist who formerly worked in the Angers horticulture sector and Claude Foulon, a former Commercial Attaché at the French embassy in Beijing.

Though somewhat overshadowed by the dominance of Dutch companies in global horticulture, "horticulture and agriculture specialist companies in France have reached a size where they are ready to export and go international," says Foulon. "French horticulture is already known in China through the major seed manufactures like Limagrain or Vilmorin. But we have much more to offer," in terms of equipment, R&D, management expertise and end products. Foulon welcomed the chance to participate in Horti China in order to highlight to the industry in China that France provides solutions worth considering.

It was the second year, ECTI has facilitated a French presence at Horti China. "The organizers of Horti China welcomed us even more than last year, so we are very happy," says Foulon. One highlight for the French delegation was the "High-end meeting in Sino-French Horticulture," a closed-door meeting arranged by the Horti China organizers. The French delegation was represented at this meeting by Bruno Dupont, President of Interfel, the French national trade body for fresh fruits and vegetables. With him were Brechet, Foulon, and a number of representatives from the French horticulture industry.

The Chinese delegation was meanwhile led by MAO Yexiong, Deputy Director-General of the Sichuan province Department of Agriculture and Rural Affairs, and included several representatives from the local governments of counties in Sichuan with high agricultural output, including products such as citrus and kiwifruit. The topic of discussion was the challenges facing growers in Sichuan and what sorts of knowledge and solutions developed in Angers could be useful in helping the Sichuan growers to become more sustainable and efficient.

Of note was a presentation by J3C Agri, an Angers-based company that develops plant-derived pest management inputs. China is still developing in regard to implementing more sustainable growing methods and using fewer synthetic pesticides, and the representatives from Sichuan showed quite a bit of interest in learning more about J3C's products.

Also, promoted by ECTI at Horti China 2018 were a series of events taking place in or near Angers. These include:

Foulon suggests that horticulturalists from China and other countries who are already traveling very far to gain new knowledge and meet suppliers in Holland should also consider adding a stop to the Loire Valley, where Angers is situated. "In this area, everything is concentrated in one place," including top research universities, breeders, equipment suppliers, producers of a wide range of fruits and vegetables, world-class vineyards and meticulously designed gardens.

"It's different from China, for example," says Thierry Huau, an urban planner and landscape architect also part of the Horti China delegation who designed the Terra Botanica garden park in Angers and has an office in Shanghai. "In China, if you want to see vegetables, you go to Shandong. If you want to see flowers, you go to Kunming, on the other side of the country, if you want to see vineyards, you have to go somewhere else, and so forth. In Angers, everything is one place."